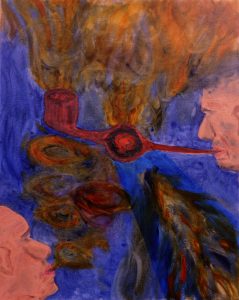 “The Predictors”, 20″x16″, oil on canvas, the first painting I know of devoted to open source intelligence.

I’m looking for a gig. The string of keywords in the title is just to get it on your radar.

Since I began writing this blog in June of 2014, it has acquired the most intelligent, select readership on the planet. You must be, because I make no compromises in the material of the presentation, save a slightly folksy style, and the occasional joke. The jokes are included because I don’t feel the reader should have to feel desperately miserable from reading.

As deeply intelligent as you are, you are limited in number. The desire to extend one’s reach is natural. With the web,  multiple presentations, to reach different audiences, are easy.

You may have the suspicion that the writing is the work of multiple individuals, or that I am a leaker,  a back channel, or a front. None of these are remotely true. When I appear to pull a rabbit out of a hat, it is because I have a unique fund of knowledge geared to the task, I have my ear to the ground, and a mindset. Many try this, but I hear more acutely than most. With almost 300 articles over three years to examine,  almost 300,000 words, you have ample opportunity to search for a cant, bias, or agenda. There isn’t any.

There is a slant, which is different. It has to do with using the methods of analysis, and mindset I used to compile an outstanding record as an open source analyst with the IARPA crowd-sourcing intelligence program, Forecasting World Events. My methods and articles compliment these viewpoints already represented in the  press:

All these frameworks are internally consistent, yet in constant conflict with each other. When one framework dominates, experts provide analysis within that framework. But when the dominant mode changes, or the story straddles more than one of the above, the real story is often lost. I work with fusion, with outstanding results in open-source intelligence. Kovach and Rosenstiel, authors of Elements of Journalism, state (American Press Institute) that journalism seeks  “a practical and functional form of truth.”  In the intelligence community, this is referred to as product. In journalism, it’s story. With open-source intelligence, the only subject of this blog, they are one and the same.

The just completed piece, Meeting between Trump and North Korea’s Kim Jong-un ? John Ciliza, and hyperlinks,  is a good example. It ties together apparently unrelated fan-dancing by world leaders. It offers a reasonable story that fills a void, though historical certainty must await future presidential historians.

For immediate validation of this process, consider the article “Understanding the Mother of All Bombs“.  By reference to three simple tables, from BATF, FEMA, and CDC, the article shows that  the so-called blast radius of the MOAB could not have been even a substantial fraction of the size trumpeted by major media sites. The enthusiasm for things that go “boom!” overpowered the real story.  Meanwhile, Reuters and CNN actually sent teams to Afghanistan to look at the site. They found — nothing. What was the real story? The reaction of Hamid Karzai, who mimicked the overblown and inaccurate media descriptions of the bomb with expressions of graphic political horror.

It may be true in journalism, as it is with some other fields, that the writing of which you are most proud is not that for which you are most recognized. In January of 2016, I wrote a five part Address to Davos, and one article in January 2017. It disappoints that they received much less attention, even from you, my esteemed readership, than articles about the machinations of our geopolitical rivals and enemies.

With Davos, I indulged myself. But a modern news organization also has to interest the reader. What can I do for you, without imposing my perhaps overly sophisticated approach in a way not appropriate to your reportorial activities?

So I’m looking for a gig that allows me to write, and/or provide editorial input and inspiration to other writers. I am signatory to no covenants. My requirements are simple:

I am in Manhattan frequently.