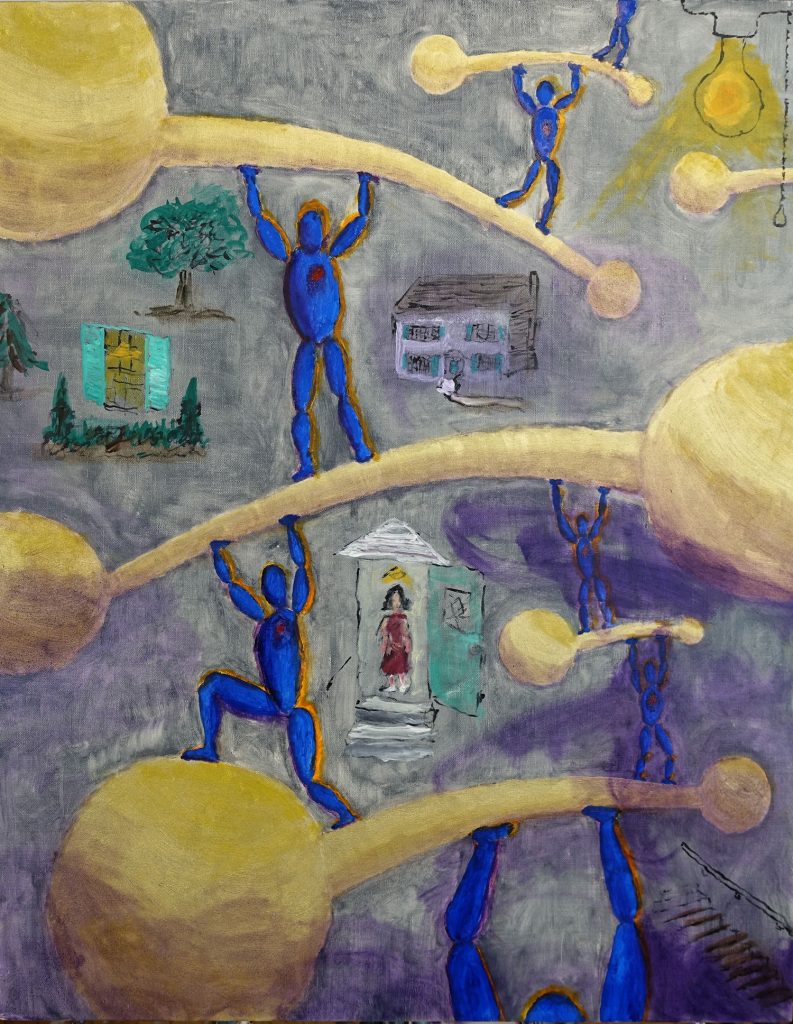 We are the Blue Men, infinite in the dimension of time.

“If I have seen further, it is by standing on the shoulders of giants.”

In 1950, the computers we know were science fiction. This did not stop mathematics, which tends to run 50 – 100 years ahead of actual need. So  40  years before Tim Berners-Lee invented the Web, pioneering computer scientist Alan Turing considered a hot problem of today: How do you detect a bot? His answer: Talk with it.

Since computer speech was neither anticipated or essential,  the Turing Test involves the use of a teleprinter by a person to converse with two hidden entities, one computer, and a second person.  If the hidden computer cannot be distinguished in conversation from the hidden person, the computer has  passed the test; it is intelligent.  This edges towards sentience, self-aware machine life. It may be the same thing.

As of 2022, though claims have been made, (BBC – Computer AI passes Turing test in ‘world first’),  prevailing opinion is that no computer has passed the Turing test. Yet there is strong motivation to deny the event. (CNBC) Google fires software engineer who claimed its AI chatbot is sentient. Google’s quest for perfection, with a chatbot powered by neural networks, may be at a level where the distinction is fuzzy.

Noam Chomsky’s deep structure linguistic theory argues that Google’s  LaMDA actually has to know things. And how much could it know without knowing about itself? Some AI researchers deprecate the Test, arguing it’s a test of deception, not intelligence. But  Turing’s intellect was great. His work, along with that of John von Neumann, is the bedrock of everything we do. Is it wise to be so dismissive?

To solve Twitter’s bot problem without expensive human employees, Musk’s software interrogator must run the Turing test. It must embody the intelligence of Turing’s human. If it does, Turing implies it’s possible to thwart any bot that lacks equivalent computing resources.  Something like LaMDA might fit the bill. But if the human brain has some secret sauce unavailable to artificial neural networks, then Musk’s LaMDA-esque bot interrogator lacks the unfoolable human advantage of Turing’s  human tester — unless he can find the secret sauce.

The secret sauce is the possibility that human brain is a quantum computer. The speculation is that a quantum brain has as yet unknown advantages against any silicon you could throw at it. To summarize:

The LaMDA chatbot and the Tesla autopilot use state-of-the art silicon neurons; neither use quantum computation. A Twitter interrogator based solely on silicon would be vulnerable to bots that share this technology. A bot war is implied. It might have entertainment value, like Saturday Night Wrestling.

Elon Musk and I have similar interests. Musk is interested in space travel; I wrote Att NASA; Move Over, Artemis; CTMT, a New Way Into Space. Musk is interested in AI; I wrote one of the early implementation  of the computer language Prolog, which by the standards of the day was an AI tool. Now Musk is interested in social media. I wrote Social Virtual Reality, An Internet Paradigm for Change, available for download from academia.edu. It’s about an evolved web, and has lots of citations. We share knowledge of terms like “regular expression, “software stack”, and “rpc”.

So although I am not an entrepreneur, I may have some insight into Musk’s thinking about Twitter. This is not about Musk’s management style, which is a separate issue, except to quote Winston Churchill: “When you have to kill a man, it costs nothing to be polite.” Otherwise, you accrue more than the minimal number of enemies.

If  one views a software enterprise as nothing more than a deterministic code base running on reasonably reliable hardware, it gives rise to the idea that it ought to be able to run  itself. All system failures are then due to poorly written code.  This view has undeniable attraction to someone who has just spent $44B for an enterprise that is losing $3M per day. It gives rise to this logic:

The last point is encouraged by Musk’s success with the Tesla self-driving autopilot, which uses compute structures inspired by the brain, artificial neurons, to solve a problem beyond the reach of conventional computers. Does this predict Musk’s success in a battle of wits with malevolent humans?

Maybe, maybe not. The argument has flip-flopped several times since 1950. It  now hinges on the role quantum mechanics in defining the human mind. It will be a challenge to present. If you’re strictly liberal arts, don’t feel left out. Ludwig Wittgenstein’s Philosophical Investigations will give you a feel for the problem. It’s downloadable from the Internet Archive.

Let’s take a little break, and let that sink in.

Ukraine YouTuber Denys Davydov speculates  a cover-up: Update from Ukraine | NATO doesn’t want to respond on Poland attack by Ruzzia | Here is the evidence. It’s plausible;  watch the video. He does not claim fact or proof. Neither do I. What follows is an attempt to construct a plausible companion story, A Tale of Two Missiles.

Consult Google Earth, and put a pin in Przewodow, Poland. The range of the S300 missile in the adapted ground-to-ground role is not known. Energy considerations suggest about 30% further than ground-to-air. There is a single stage version, and a two-stage version, so the maximum range is a spread of 75 to 150 miles. So for Russia to  hit a target near Lviv , a launch point in Belarus is required. Crimea, or even Melitipol, is too distant.

A convenient launch site has nearby infrastructure, which is scarce in southwest Belarus. For this story, the vicinity of Brest is proposed as the launch site. Put a pin in it, and use the Google Earth “ruler” tool. A Russian missile overflies Przewodow on the way to Lviv.

In the original ground-to-air role, it maneuvers by two means:

The solid fuel propulsion functions only in the first (WAG) 30 seconds of a 3 to 5 minute flight. As  the missile descends towards the target, it has only the fins.

If you’re familiar with the history of Saddam Hussein’s Scud missiles, you can anticipate what happens next. The control system isn’t good at using the fins; it goes out of control. The Russian S300 starts to tumble, increasing aerodynamic drag, causing it to fall short of Ukraine, crashing in Poland instead. It may even break up. The Ukraine S300 follows it down, correctly self-destructing.  The crash site is littered with the remains of two missiles.

Sticky point: The Russian missile warhead likely caused the fatalities, unless the victims were actually struck by the shattered bits of the Ukraine air frame.

Even if this story turns out to be somewhat descriptive, it would not be an important truth. Neither would what actually happened to Nordstream (Who Sabotaged Nordstream Pipelines?)

If the facts are obscured by fibs, the fibs are barely audible over the cacophony of Russian lies. See Otto Warmbier; When is it OK to Lie?

Political science is, academically, a broad, inclusive subject. The media have reduced it to the tactical form, which notably lacks self-awareness. We need a term that, encompassing the tactical, engages the greater framework implied by “meta.”

Definition of meta, Merriam Webster (3) — “usually used with the name of a discipline to designate a new but related discipline designed to deal critically with the original one.”

Tactical politics is about the parameters of the moment, with the assumption that the form of government is  stable. Meta-politics is about the big picture: Why things are the way they are, and how they might change, in scope completely off the tactical radar. It is a neglected subject, which is why we start by giving it a name. It’s urgent — American democracy is in peril.

Social media is a significant cause, amplifying extremist viewpoints and misinformation that would otherwise be filtered. In some societies,  gatekeepers are elders, or”wise  men”, who have over their long lives seen more strife and suffering than impetuous youth can even imagine. In other societies, elders are the oppressors, challenged by comparatively enlightened youth. Why one-or-the-other prevails or flips is a meta question, vaguely addressed by Pareto’s “circulation of the elites.”

There is more than this to the American crisis. Our electoral systems are mostly majoritarian – plurality. In some other democracies, proportional representation facilitates formation of more than two parties, by which the political landscape would  presumably be fluidly remodeled. In the U.S., the closest thing to a viable third party was the Bull Moose Party of 1912-20, which did not outlast Theodore Roosevelt.

In the past, majoritarian – plurality machinery gained flexibility with across-the-aisle collaboration. Sadly, this has been supplanted by a majoritarian ethos, the “dictatorship” of the majority. While proportional representation would seem to provide an institutionalization of this, the records of other nations shows otherwise. Nothing replaces commonality of interest.

Her no-good wastrel father, Mr. Doolittle, objects to Henry Higgins’ adoption of his daughter, and demands appropriate compensation. Higgins, and his friend Pickering, are shocked, “Do you mean to say, you callous rascal, that you would sell your daughter for 50 pounds?…Have you no morals, man?” “Can’t afford them, Governor,” Doolittle replies, “Neither could you if you was as poor as me.”

To paraphrase, an individual buys the morals he can afford. The cost of purchase is partly measured in bucks; the rest in peer pressure. The cost of moral maintenance is personal sacrifice, and benefits perceived as distant and indirect.

This is meta-political calculus relevant to the two parties now. Can you analyze  without partisan reference? Give it a try.