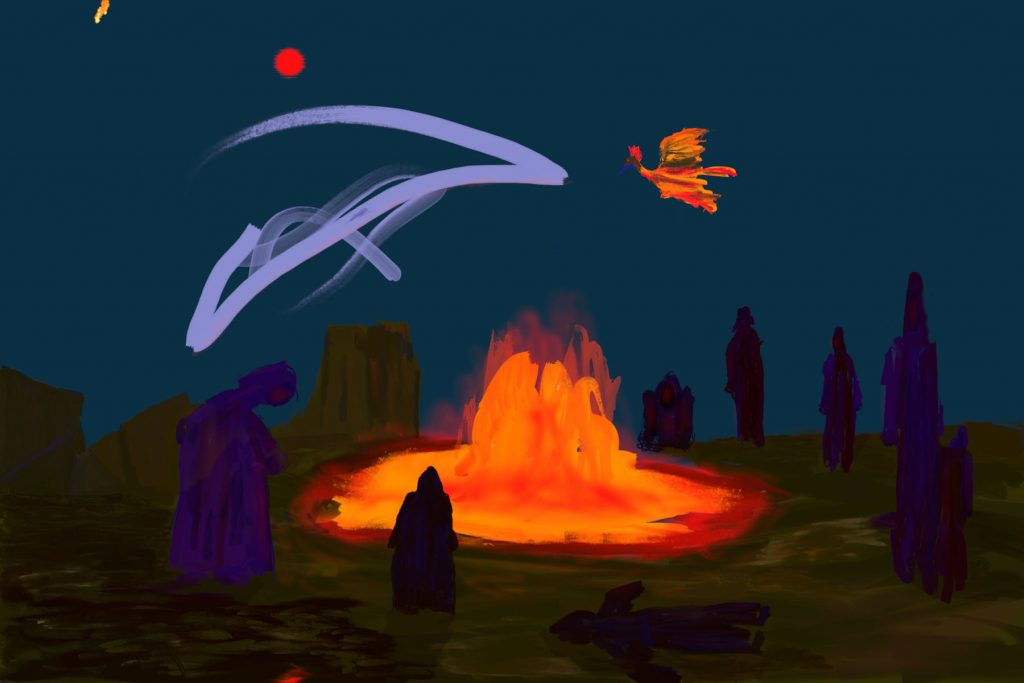 Firebird, or Phoenix, as you prefer. The Firebird brings bad luck to those who try to catch it.  The Phoenix is reborn from the ashes of the fire.

Dedicated to the brave people of Ukraine.

We’re not predicting. It is possible to give some shape to the future. The mainstream media studiously ignores the chemo tracks on Putin’s hand, and other obvious medical issues. These are key to 2023, far more deterministic in effect than anything else, save the Ukrainian ability to fruitfully stymie the Russian military. See  Putin Disappears; Illness a Factor?

Here in the U.S., we’ve had recent exposure to the authoritarian mindset, of both the leader and the follower. This is a quasi-personal relationship. When the leader  suffers political eclipse, his loyalties are not transferable. The obedient masses become the querulous masses.

So it is in Russia. Putin’s  popularity results from deep authoritarian tradition. Stalin said, “What can I do? The people want a czar.” When Stalin died, executions followed, not on the scale of the purges, but as a political part of the succession process. We see this now, an accelerated rate of extrajudicial executions, as hardliners attempt to “shape the battlefield” for the succession struggle.

The hardliners authored Putin’s expansionist ideology; he didn’t do it himself. He represents both an asset and a hindrance:

Thus far, the logic is  a clockwork. Now we come to the first question:

The clockwork resumes; the murky interregnum is followed by Putin’s absolute disappearance. His legacy becomes subject to interpretation and appropriation. In life there have been at least three Putins:

The factions that emerge will be free to edit Putin’s image. The universal question will be “How did we become so poor?” The hardliners will be blamed for massive destruction of wealth. And they will have no good answer, because they don’t know how to run a country. Many of those who do have already fled Russia.

Pretenders to the throne will have a hard time acquiring legitimacy from Russians who miss their czar.  In other countries, the military have often stepped in. In Russia, there are few visible candidates untainted by debacle. Surovikin is a possible exception. Prigozhin is an alleged ally, which may be a highly temporary arrangement. Or, as suggested in Power Transition in Russia? Revolution? Part 1, colonels could revolt. See also Power Transition in Russia? Revolution? Part 2.

The effect on the Russian military will be profound. In the event of an unseemly succession of Prigozhin, some officers may recant their oaths. The military may in fact crumble. The blood lust between factions, with practiced lethality, will be huge. In this environment, it is natural for Russians, cultural heirs to the Purges, for the sake of survival, to mask their thoughts.

Will a “Party of Wealth” vanquish the “War Faction”, so adroit at political murder? This cannot be assured in the first round. But Russia will always have the capacity for rebirth as a civilized nation, as celebrated by  Igor Stravinsky.

(CNN) Head of major Russian shipyard dies suddenly, no cause given.

Espionage/execution is likely. There is significant possibility he sold the noise signatures of the improved Kilo class submarine.

At the height of World War II, Winston Churchill, Prime Minister of Great Britain, sailed across the Atlantic, hazarding U-boats, to address Congress on January 8, 1942:

Thank you Zelenskyy, for reminding us of the price of freedom. Today, we are all Ukrainian.

(Wapo) No conclusive evidence Russia is behind Nord Stream attack.

Russia did not do this. They own Nordstream, and are the only ones who can put gas into it, or make money from it. They would sabotage adversary assets. See (9/28) Who Sabotaged Nordstream Pipelines?

The popular misattribution results from the intrusion of the habit of  the political “blame game” into the sphere of security. It’s a bad habit that could be costly in  the future. There are enough reasons to hate Russia without it.

Were the perpetrators found, they would deserve medals. They likely will not be.

All watched over by machines of loving grace.

In the days of the Soviet Union, the opacity of the Kremlin gave rise to the specialty of Kremlinology. The tools of the trade were politics and personality. The health of the subjects was addressed in the most general terms.

The new Kremlin affords more access to all but the most guarded sanctums. Yet Kremlinologists ply their old trade, taking advantage of only part of the new cornucopia. One obstacle remains;  Kremlin players now wear masks of concealment. Simon Sebag Montefiore’s book,  Stalin: The Court of the Red Tsar, quotes Beria at the death couch of Stalin. “Comrades, I have saved us all!” anticipates scenes of what may soon occur.

On May 30, I wrote Is Putin Seriously Ill? Then regarded as almost baseless speculation, his illness has gradually migrated towards respectable opinion. On July 25, Parkinson’s disease or Parkinsonism was identified as possible in CIA Bill Burns (Putin) & CNN (NY Polio).  Since then, visible motor problems are indicative of actual Parkinson’s disease.

Yet this has little play among Kremlinologists and the media. Among  practitioners, illness is something that happens to you. When it does, you consign your fate to physicians. Among physicians, it is strongly taboo to diagnose without seeing the patient and ordering standard-of-care tests. This results in severe bias of exclusion among historians, and their contemporary counterparts, analysts.  Ebola, Rats, Lice, and History, and Hans Zinsser Part 1, provides a capsule of Zinsser’s thought:

Historians seem to keep within the perspectives of personal comfort; no successors have taken Zinsser’s mantle. Disease is merely noted as coincident with events political and economic, when more than occasionally, it has been the prime driver. Disease has driven civilizations into decline, and exterminated primitive populations.

In a YouTube video, a British analyst, noting that Putin recently drove the Kerch bridge, pronounced his health adequate for the annual year-end media events. Having disposed of health, he offers conventionally political reasons for his disappearance, reprising the error of historians. His medical judgement is wrong. He should have found an oncologist willing to give an anonymous opinion.

The media bias replicates the above, with an addition. Juridical circumspection is a linchpin  of a respectable free press. It is misapplied here. Putin is not protected by HIPAA, due process,  right to privacy, or presumption of innocence. He is the valid subject of the almost-facts that dominate intelligence work. Here’s one: Putin is dying. This estimate is based entirely on public video.

What is he dying of? The tabloid press is full of contradictions. It is impossible to extend the estimate based on contradictory purported diagnoses. One new symptom, coughing, suggests wide metastasis of whatever it is. Metastasis to the tissues surrounding the lungs frequently results in malignant pleural effusion.

During his disappearance, Putin may receive a variety of treatments, some temporarily disabling, advisable only for a ruler for whom there is no alternative:

Unlike infectious disease, every cancer is unique, the result of the myriad forms of genetic damage, unique to the individual.  The cough, if confirmed, collapses the timeline. Previously, the WAG was 3 years. Now, 6 months.

The Kremlin players, with masks of concealment, have a difficult choice, to watch and wait, or hasten. They are not friends; they are rivals.  When they drop their masks, they may be unrecognizable. Who strikes first has the best chance of neutralizing the others, but at a price.

Elon Musk suspended several journalists who cover him from Twitter, alleging they violated his new policy against disclosing his jet’s location.

Doxing is hate speech, wishing ill for a group or individual; hate speech requires the same sanction.  We could hope that, personally touched, Musk will come to realize this. The principle obstacle is that Musk, like many who are supremely talented in a concentrated way, may think  the world is populated by minor versions of himself. If Musk realizes, what are his options?

Part 2 discusses bot detection, which stands in front of the far more difficult problem of post moderation. Let’s finish and carry the wisdom forward. The Turing Test is pass-fail. If your silicon interrogator is well trained, it may work pretty well. False negatives, “not a human”, are inevitable; an idiot may be mistaken for a machine. Likewise, a bot that pushes the state  of the art may appear witty, urbane, sophisticated, backing out of a carefully laid trap with a conversational gambit of its own.

It gets harder. A bot can have a human component. This is likely to be the case when a bot solves a pictorial  CAPTCHA, a “Completely Automated Public Turing test to tell Computers and Humans Apart”. You know these as the 3×3 board with “Click on each square which contains a traffic light.” This is very hard for a computer to solve, and trivial for a human. Poor people in Third World countries solve these as piecework, a few mils/CAPTCHA.

This works for bots because the pictorial CAPTCHA is independent of culture. Now our problem becomes “Is the subject a Francophone?”  Our silicon interrogator must be recast in multiples, one for each culture.. There are many. In the Battle of the Bulge, not knowing baseball trivia could get you shot.

In an initially active mode, the interrogator has these advantages:

Now we come to post moderation.  The above list is void.The  interrogator’s role is reduced to the passive, vigilant watchfulness of a monitor, more stress on the heuristics of AI post moderation. Here, the user is in control. The  test result is  more than pass/fail; there are choices. In  order of severity:

This requires that our AI moderator actually know things. Suppose a user writes,

It could be a joke. Or “pumpkin” could be a recently minted code word of a hate group  or individual. How much does the monitor have to know to make the distinction? There are three answers, views of AI that have almost nothing to do with each other:

Symbolic is precise and obtuse. Neural is imprecise, and what we think of as imaginative.  Neither is fit to steward human beings. I would like to think this horror lims the far future.

It’s not. It’s the sound of a freight train horn, when your car is stalled on a grade crossing.