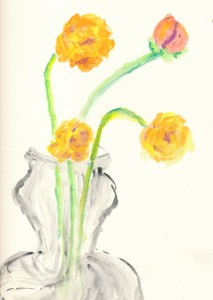 Reuters: Radioactive material stolen in Iraq raises security fears. The article states that 10 grams of iridium-192 are missing. According to Isoflex, a supplier of iridium-192 to industry,  each gram of fresh iridium-192 has a radioactivity of 550-600 Curies.

(Because this is an exceptionally dismal subject, I’ve included a sketch of marigolds done in gouache as a mood antidote. Click on the marigolds whenever you feel you need relief.)

Some readers may be interested in what the open-source perspective can provide to estimate the consequences of a dirty bomb explosion in Iraq. It is feasible to present a meaningful calculation in “back-of-the-envelope” fashion for contemplation or use by someone who  has had a freshman year of engineering, science,  or perhaps finance. Should other threats be reported in the future, that reader  could use the discussion for enhanced understanding. So it’s worth doing.

Since it’s topical now, let’s get to the results. The missing iridium is part of a gamma camera, a device for checking oil pipeline welds. If Isoflex is the supplier, the camera contains ten disks of 1 gram each. Since the theft or loss was sometime in 2015, and the threatened usage some time in the future, let’s assume one half-life of Iridium-192, which is 73.83 days, elapses before use, so that 3000 Curies is available at the time of use.

There has been an enormous amount of research on explosive dispersal of radioactive substances. We don’t need it to get a decent idea of the outcome.  The vaporized iridium would quickly oxidize or bind with other substances comprising dust particles. Let’s assume that half of it comes down within a 100 meter radius of the explosion.  Let’s assume that it is uniformly distributed within that circle, and what escapes the circle does not concern us.  If this seems crude, the actual scenario is not known, even to specialists,  unless it happens.

The actual scenario would be characterized by plumes, vortices, and winds. As I write this, the wind speed in Baghdad is 6 miles per hour, which implies that the actual dispersal pattern cannot be circular. But because the  decay of radioactivity is exponential, the numbers that result are less influenced by environmental variables than naive intuition might suggest.

The terrorists might choose to include the entire 10 gram load in one dirty bomb explosion. Or they might use each of the ten 1 gram disks in separate explosions. Let’s consider both possibilities. After the dust settles, perhaps the next day, what dosage will a person receive who visits the 100 meter circle? The back of the envelope calculation indicates that:

Mosque bombings in Iraq kill a lot of people. If the event of a dirty bomb actually occurs, the conventional explosives will do most of the damage. But what about decades of barren land, forced evacuation,  mini-Chernobyls?

Unlike many other kinds of nuclear accidents, a dirty bomb that employs iridium-192 would not cause massive, long term defacement of the environment. But neither should we be complacent. Much worse things lurk,  things of nightmares.