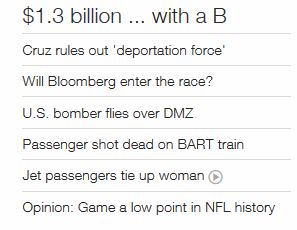 This is not a one-off for CNN, who have an unusual attraction to the phrase, “the next war will…”, where the text anticipates not a brush war, but a major conflagration that would leave a good part of the world in a bad state, if not ashes.

CNN have absorbed too much of William Randolph Hearst. The headline, “U.S. bomber flies over DMZ”, is a classic example of yellow journalism. Quoting Wikipedia about Hearst,

Moving to New York City, he acquired The New York Journal and engaged in a bitter circulation war with Joseph Pulitzer‘s New York World that led to the creation of yellow journalism—sensationalized stories of dubious veracity.

Joseph Pulitzer was a good guy. Hearst was not; he was a rich guy. There is a difference.

CNN, even with your thirst for profits, you can do better.