I am an artist. This entitles me to make inane comments about Hunter Biden’s art, but I will resist. My comments will  be permissive and supportive. Biden’s art,  like Art Brut,  is media intensive, strongly shaped by the limitations and imperatives of the media. Biden’s media is ink. I painted Violet Rain, below, with mixed media. Biden blows with a straw; I flung ink with a wet brush. The clouds and dim sun are in oils, for ease of blend and glaze. In each case, the physical properties of drip and run complement the hand of the artist. 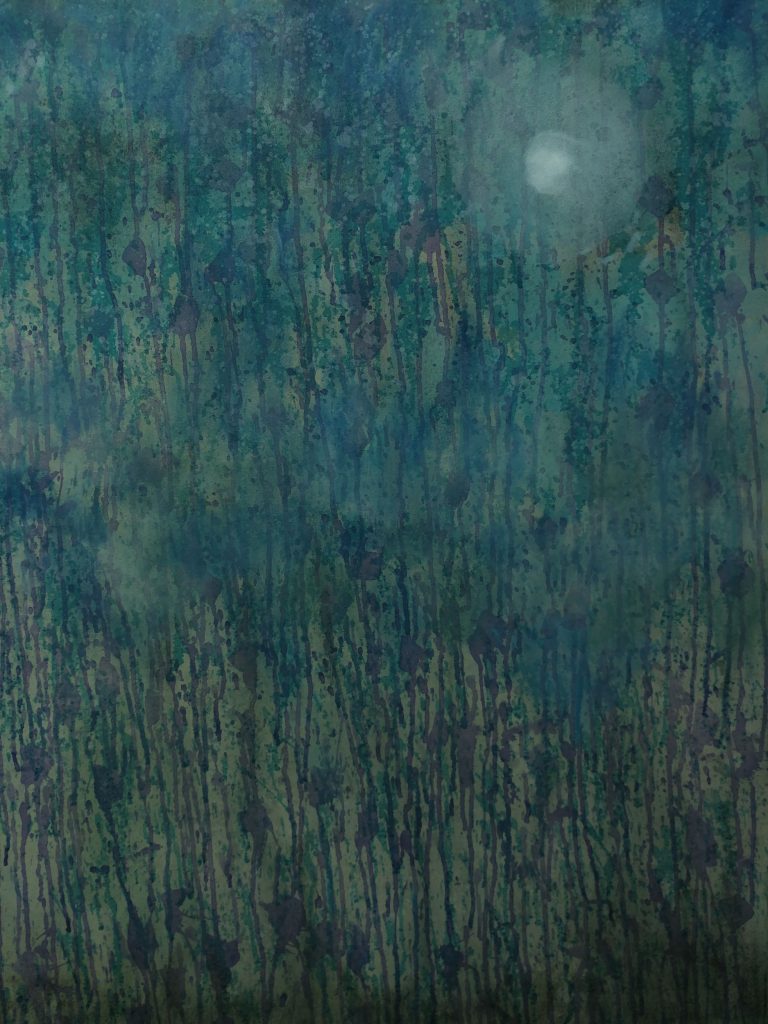 This is not about Hunter Biden the person; it’s about his art. Art is storied with personal redemption and destruction. I’ll take Hunter at  his word it’s about redemption. Larry Kudlow disagrees: (Fox) Kudlow rips Hunter Biden’s $500K paintings as ‘fraudulent’, ‘scam Art’.  He compares Biden’s work to his wife’s, Judith Pond Kudlow, “detailed pieces of natural realism” which have all the freshness of Miss Havisham‘s wedding cake (Charles Dickens, Great Expectations.)

Biden has no formal training. In stark contrast, Mrs. Kudlow runs the NYK Academy, which replicates a  pre-Impressionism 19th century French education, “…based on the Cours de Dessin developed in the 19th century by Charles Bargue which was used by Jean-Leon Gerome to train artists at the Ecole de Beaux Arts in Paris.”

Kudlow accuses Biden of high crimes and misdemeanors, but his aged brain may just be out of sync with anything newer than Impression, Sunrise (1874). It may not be too late for him to attend Salon des Refusés. Maybe Biden’s art is too new?

Sadly, Biden’s art is not immune to the opposite criticism, too old. (Washington Examiner) Is Hunter Biden’s art worth $500,000? Here’s what a curator has to say, is dense with criticism, rendered by Jeffry Cudlin, art professor at the Maryland Institute College of Art.  His target was Biden’s inner motivation as stated to Artnet in We Spoke to Hunter Biden About His New Life as a Full-Time Artist, and His Personal Quest for ‘Universal Truth’ Through Painting. Quoting,

“I don’t paint from emotion or feeling,” Biden said in the interview. “Which I think are both very ephemeral. For me, painting is much more about kind of trying to bring forth what is, I think, the universal truth.”

“How much of that value is due to the art itself? That’s easy. None of it.”…“The last time artists said things like this,” according to Cudlin, “was maybe circa 1955. It’s a modernist trope, and modernism at this point is a period style, having effectively ended sometime by the end of the following decade, around 1968.”

Post Modernism replaced Modernism, so Biden’s art is too old? Too new and too old? Too old and too new? What are we to make of this war of experts? Could Biden have avoided this by clamming up?

For why Cudlin would use this blurb to fashion an indictment, refer to a delightful little book by Tom Wolfe, The Painted Word, in which he wrote,

Art made its final flight, climbed higher and higher in an ever-decreasing tighter-turning spiral until… it disappeared up its own fundamental aperture… and came out the other side as Art Theory!… Art Theory pure and simple, words on a page, literature undefiled by vision… late twentieth-century Modern Art was about to fulfill its destiny, which was: to become nothing less than Literature pure and simple”.[4]

Which is what you just read of Jeffry Cudlin. Now you need another book, The Orange Balloon Dog: Bubbles, Turmoil and Avarice in the Contemporary Art Market. The book jacket blurb:

Within forty-eight hours in the fall of 2014, buyers in the Sotheby’s and Christie’s New York auction houses spent $1.7 billion on contemporary art…. A painting… featuring four lines from a Francis Ford Coppola movie stencilled in black on a white background, sold for $28 million…baffling activities …exchange of vast amounts of money and what nudges buyers…delves into the competitions that define and alter the value of art in today’s international market, …Thompson also warns of a looming bust…

The entire universe of buyers of high-end art consists of roughly 1300 individuals. Vast quantities of speculative art are in dark storage in free ports  around the world; scarcity is artificial. The art market is highly manipulated, and inefficient, even though appreciation  is a major goal for the 1300. But are they smart?

Smart, maybe. Tough, definitely. Market manipulation is so the norm, and so extreme, courts have exonerated the accused, with “plaintiff should have known better.” How is price set? Ashley Mears explains by analogy in Pricing Beauty: The Making of a Fashion Model. The value of a painting, or the rate of a fashion model, is not intrinsic to the art or the model. It’s set by a closely knit subculture, of dealers or agencies, invisible to the consumer.

Kudlow and Cudlin are correct. Biden’s art, or anybody’s art, has no intrinsic value, which is acquired when the 1300 set the investment value. From there, it goes into dark storage until some bond trader decides to buy a little soul, or in Biden’s case, “universal truth.”

If you are not Hunter Biden, an anecdote will help. In an early class at SVA, I painted a female nude on a blanket, on a 5 x 5′ canvas the instructor had dug out of the trash. By end of class, the lady still had no hands. Clearing the sidewalk like a snowblower, I marched it, hands held high, up 7th Avenue  from 21st to Penn Station. It got the approbation always  given to ladies on canvas, the phrase, monotonously repeated, “Not bad. Not bad at all.” On New Jersey Transit, she took up 3 seats.

A slightly drunk 40’ish bachelor had spent the evening lamenting he was still single. He persistently wanted her on his wall. I explained she didn’t have hands yet.  He didn’t care; how much did I want? Thinking to get rid of him, I said, “a grand.” He was thinking  of “more like a hundred bucks.”   We then proceeded to argue about improvements. I proposed adding a Martian with a ray gun; he wanted more women. When I got to Trenton, it was too big to fit in my car, so the garage office admired it for a few days. They thought it was “not bad, not bad at all.”

This is  how value is established. My Lady on a Blanket is worth a hundred bucks. Top that, Hunter Biden!