The name of this painting: They died for nothing.

Some die for love, others for hate, or patriotism, or greed. These 428,000,  who will be joined by a number that does not yet have an upper bound, died for nothing.

The dead, mostly civilian, mostly innocent and uncomprehending, were victims of the mercenaries’ need to eat, and to deny food to the enemy. The prize was power, an abstraction clothed in religious strife.

In that time, armies lived off the land. Sadly, this idea still has representation in modern political thought: the struggle for power, clothed in  ownership of the myth of America, consuming the substance of the body politic. It came down to wearing masks.

In the interest of a broad audience, I’ll skip fixing blame.

Bring us back together, Joe and Kamala.

Work with who you have to.

Ideation of a  coup continues. At the center is one very desperate man.

In theory, POTUS is commander-in-chief of the armed forces. The deployment of 20,000  National Guard troops to Washington results in this ideation: “If only I could command those troops, I could overwhelm civil authority.” In the eye of a desperado, the mechanism is martial law.

It would explain the sacking of the Defense Policy Review Board, and the attempt to appoint a new NSA General Council. (CNN) Acting secretary of defense orders NSA chief to install Trump loyalist as agency’s general counsel. Alternately, the appointment could obfuscate impeachment trial testimony regarding presidential communications.

This does not imply a coup is viable, or that a cabal of conspirators even exists. It could simply be mad ideation, or the ideation of a small, a non-viable cabal.

History cautions that successful coups have occurred without force supremacy. The sequestration of key people, such as those responsible for presidential succession, and a hidden power base within government, can suffice.

Until the Inauguration, the defenders of the Constitution have a difficult task, to prevent a coup lead or instigated by POTUS, with these measures:

We cannot stop the ideations of the desperate. If these measures have already been taken with effect,  realization of our worst fears cannot occur.

Leadership in this interval  leading up to inauguration is an informal collective of very competent people, who unfortunately lack the statutory authority on which all notions of deterrence rest.

The situation persists because  the risk of domestic unrest is more real to the politically astute than the risk of hostile foreign powers.

A hostile foreign power might be emboldened to shortly take a risk we would normally call a miscalculation.  Their numbers might actually add up.

The remedy to risk from hostile foreign powers is to reestablish the statutory authority that is the basis all forms deterrence, as provided for by the Constitution.

It’s much cheaper than fighting a war.

Several of President Trump’s top aides, including national security adviser Robert O’Brien, are considering resigning in the wake of his response to a pro-Trump mob breaching the US Capitol today.

This is addressed to those officials. Please don’t resign. We need you more than ever.

This is a day which will live in infamy, but not yours. The  minor shame of serving to the end is erased by the service you have rendered. The numbers of experienced professionals like yourselves, who stepped up for the most difficult jobs of their lives, is the most impressive fact of this administration.  You have together borne the shield of decency and preserved the Constitution.

On 12/21, I began to wonder: Coup in the United States? In May of 1964, this almost happened… It may yet emerge as more real than mere ambition, prevented by one insuperable obstacle, YOU.

You, as interlocutors with the rest of  government, were the barrier to illegalities of usurpation. You defended the Constitution and preserved the Republic.  This remains your obligation  and reward until Inauguration Day, unless the 25th Amendment is invoked.

Even if history does not shower you with the praise of the victorious, if you stay the course of the Republic, this will be your finest hour.

So there’s no misunderstanding, I would drive three hours to get either shot. But there is a strong argument for a half dose.

“The initial diagnosis is encephalomyelitis,” the Health Ministry said in a statement released on Friday night. Encephalomyelitis is an inflammation of the brain and spinal cord.

Encephalomyelitis does not result from atopy. It is a result of a cell-mediated autoimmune reaction. In the few 3rd World countries that still use the Semple rabies vaccine, it is a regular and frequently lethal side effect. Brain damage is frequent in survivors.

The Semple vaccine is made of animal nerve tissue with no purification. When encephalomyelitis results from this vaccine, it is the result of introducing into the body proteins which are both similar and different. The foreignness of the protein induces an immune response that also attacks native proteins. But this mechanism gives no hint as to why it would occur with an RNA vaccine.

A clue is offered by (Nature, 12/20/2020) The S1 protein of SARS-CoV-2 crosses the blood–brain barrier in mice. For a neat summary, see (ScienceDaily) COVID-19 virus enters the brain, research strongly suggests.

The Mexican physician has a history of severe allergic reactions. How could this tie in with encephalomyelitis? A possible mechanism:

In traditional vaccines, adjuvants have been combined with antigen to increase the potency of the shot. Various theories explain why adjuvants work:

As potentially toxic substances, adjuvants went out of fashion for a while, with preference for highly potent antigens synthesized by recombinant techniques. Now adjuvants are back in favor in new flavors.

RNA vaccines produce a sudden flood of unbound s-protein antigen. More traditional vaccines present antigens bound to larger structures, either adjuvants, or virus-like-particles. This reduces the mobility of the antigen, in this case s-protein, lessening the chance it can pass the blood-brain barrier. This “safety feature” cannot be incorporated into RNA vaccines.

Since this is unlikely to have a large lay readership, we could finish with Paracelsus. You know what he said. Even a handful of cases of encephalomyelitis could frustrate mass immunization.

So cut the dose in half. Yes, I’m still driving three hours for the shot. I’ll take mine with a side of epinephrine. 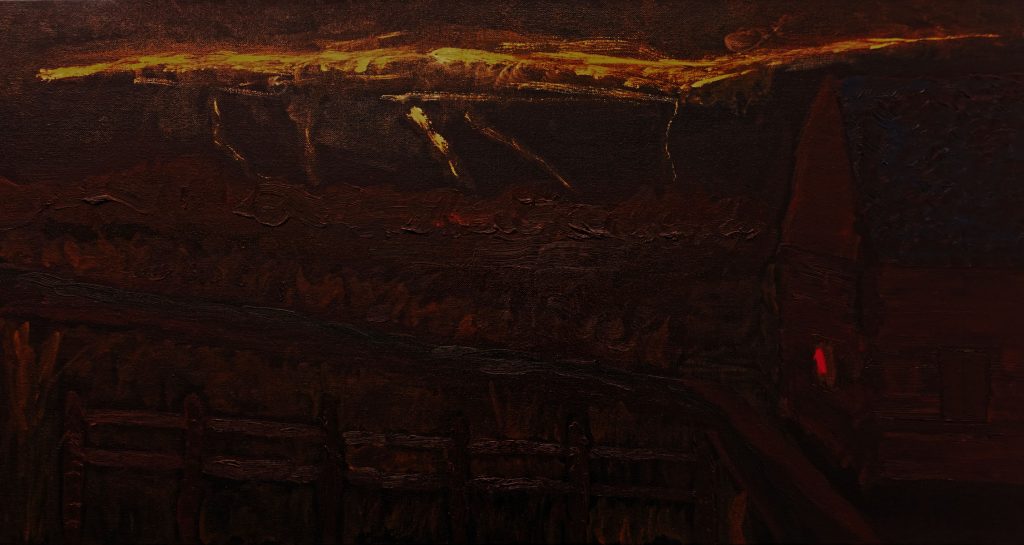 I’m too much of a realist to revel in a single day, and wish you a happy new year. From (Shakespeare) Richard III,

Now is the winter of our discontent
Made glorious summer by this sun of York;
And all the clouds that lour’d upon our house
In the deep bosom of the ocean buried.
Now are our brows bound with victorious wreaths;
Our bruised arms hung up for monuments;
Our stern alarums changed to merry meetings,
Our dreadful marches to delightful measures.
…
I am determined to prove a villain
And hate the idle pleasures of these days.
Plots have I laid, inductions dangerous,
By drunken prophecies, libels and dreams,
To set my brother Clarence and the king
In deadly hate the one against the other:
…

The oil-on-canvas painting is inspired by a  shack in southern New Mexico, where I saw orange desert lighting, bolts spanning the entire sky.  It was made in an unusual way.  Mars Black mixed with heavy medium was applied in heavy impasto. The line drawing was inscribed with a stick. It was set aside to dry for a month.  All of the colors and shades are the result of thin glazes. Lit straight on, the canvas appears inscrutably dark. The photo was taken with side lighting.

Look!  In the window of the shack! Is that glow the lamp of a solitary dweller, a beacon of hope, or just the reflection of lightning?

Your choice, the freedom of imagination.