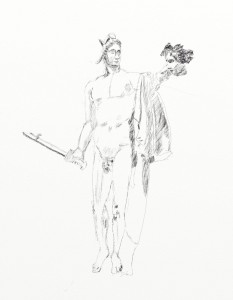 Perhaps you’ve noticed that I’ve passed on the obvious Greece question: “Will Greece stay in the EU?” This prediction problem draws attention to a paradox. Greece, a parliamentary democracy with a Western ethos, a country to which the West traces a large part of cultural inheritance, is familiar to us. The Greece debt crisis involves other Western countries, with which we are at least as familiar. Shouldn’t the outcome be more transparent to prediction than the comparatively different cultures of the Middle East? All the workings and gears of the Greek crisis are open to minute examination. Russia presents a puzzling combination of opacity and sudden insight, yet this blog is full of Russia analysis.

So it has something to do with the number of actors, and independence. Hypothetically, in a society in which all political opinions were in perfect lockstep, all the actors would count as one. Since the national intelligence agencies have intensive interest in the mathematical formulation of intelligence problems, it’s worth mentioning the analogies to linear system theory. A system is deemed observable if all the internal variables can be determined by external observation. The number of internal variables correspond to the actors. The rank of the system corresponds to the number of independent actors.

But this is not golden, because nothing that has to do with human beings is linear – with the limited exception of trend extrapolation. Trends end unpredictably. In non mathematical terms, the number of actors is huge, including not only heads of government and monetary authorities, but, in a very real sense, the electorates or special interests they are responsible to. Some, such as Alexis Tsipras, are standing on the political equivalent of quicksand. Prediction would be much easier if he were a dictator, but he is not. Modern Greece is a surprising mix of political responsibility that transcends party lines, political irresponsibility, greed, reasonable concern for pensioners, a lack of final comprehension until the cash machines shut down, widespread leftist sympathies, gross hypocrisy, and attitudes and interests that defy enumeration.

The attention of the press is selective, not inclusive. To derive a prediction solution from open sources, it helps to have a long memory, and to be attentive to details as they are reported. The flaws of the euro were discussed, a few years back, when several EU countries had similar crisis. Martin Feldstein’s article emphasizes that in an area served by a single currency,  the workforce must be mobile. But it  was more obviously noted at the inception of the euro that it created a separation between the national power to spend, and the power to mint money. See the Credit Writedowns article, “The Euro System Contains a Serious Flaw.”

Such observations are very old, dating to 1999 and earlier. As they say, the road to hell is paved with good intentions. Thanks to the selective attention of the press, we now have a list of “almost facts”:

So now to the motives. Tsipras won’t have to tell his mother for a while longer.  The Germans would prefer it all to end with a whimper, not a bang. Greece will exit the euro, with a sequence of events as  passively biased as a cataclysm can be.

It’s a tragedy with comic overtones; a fragile, if not defective, economic theory, incompetent against relatively mild centrifugal forces of nationalism within the E.U. Since Greeks, even wealthy ones who own multiple dachas with undeclared backyard swimming pools, tend to describe themselves as leftist, this will be an opportunity to test their commitment to the collective. Suicide, from eviction, or business failure, is one of the most tragic consequences of prescribed austerity.

Communist countries hardly excel at success, but some of them, notably Cuba, have managed failure well. But for all the gushing of leftism, the economic elite are well respected in Greece. The devise of novel structures to circumvent the disenfranchisement of a rogue nation cannot be excluded — if all the “almost-facts”, particularly the no-haircut factoid, hold.