Relevant as it was last year, I offer Address to Davos; Avoiding the New Dark Ages.

How will our successors remember us? The bronze head is not human. T-20 years and counting to the Technological Singularity.

I have a dream.

The video misleads. Crucially, at 2:05, James Carafano states, “All these things are radio controlled.”

Cheap commercial drones are programmed by the factory to listen for the signal of a controller. But anybody who can hack firmware can take that feature out.

Expensive U.S. military drones, which are not intended for kamikaze use, have behaviors that enhance the chance of safe recovery if the controlling signal is lost. They cannot be fooled by false instructions, because the control stream is encrypted.  (Some readers may recall adversary eavesdropping in Afghanistan. That was of the video stream, from the drone camera to base, for which encryption was neglected. The enemy could see, but  could not control.)

The drones used in the attacks on Russian bases had advanced control circuitry that relied on two radios:

Subject to clarification, that the Russians  were able to crash some of the drones electronically suggests that both GPS and the controller link were active.

Drones were used by ISIS in defense of Mosul. Those drones did not have GPS. They were guided visually by ISIS controllers a few hundred yards away. They were brought down by U.S. countermeasures,  by jamming or inserting false commands into the human control link.

But there is, and always will be a form of navigation/control that cannot be jammed:  dead reckoning. The crudest approximation always works to some degree. Ancient mariners used it when they could not see the sky. You use it yourself  when the light goes out. So let’s pretend we’re a drone. This is what we do when the two radios, GPS and control link, go bonkers:

I have no interest in offering refinements to the above.

Reports indicate that the drones used in the Russia attack did not have the smarts to deal with tampering of the radio signals. Lack of sophistication has been the hallmark of ISIS, because individuals who self-select terror are not the brightest specimens of humanity. But neither is it particularly hard to do.

So our desire for a rigorously proactive defense is thwarted. The current drones can be misdirected by GPS jamming, or caused to crash by tampering with the control signal. With help from a rogue state, this may not always be so.

One bright spot: Of all the possible targets of a directed-energy weapon, lightweight drones are the softest. The low energy required to deform or ignite  plastic or wood makes a man-portable laser feasible.

Here’s a link to previous articles. Since that time, the FBI has (ABC) come to doubt. But the Russian research involved exposure over weeks, at much lower thresholds than noted by Western sources. Did the F.B.I. consult “Effects of Ultrasonic Noise on the Human Body – A Bibliographic Review”, or set up a similar long term experimental facility?

The NY Post has the most clearly audible sound, as part of a video with spectrum display.  Points:

(IEEE) Was a Sonic Weapon Deployed in Cuba dismisses the feasibility of weaponized ultrasound, citing (pdf) Acoustic Weapons—A Prospective Assessment: Sources, Propagation, and Effects of Strong Sound . But this is contradicted by the Russian references provided in Havana Sonic Attacks — Addendum for techies only.

But for these to fit, they must also cause auditory parasthesia, changing the sensation of innocuous sound to noxious sound.

A few consumer appliances  can make high frequency, or ultrasonic noise, particularly if they are slightly broken:

If the quality of the recordings provided to the Office of Naval Research is sufficient, it can be determined if the spectra

One of the two spectral displays I’ve seen, not the one in the NY Post video, shows a sharply defined “comb structure”. It has the purposeful signature of a weapon.

The argument for a weapon hinges on Russian research:

But how ludicrous to think they could be involved in any way. I’ll lay money Greenland’s independence movement is behind it!

The top question for many readers is whether the aid suspension is a good idea.  Let’s outline the problem:

There’s a long and a short to why U.S. money and pressure has not thus far motivated action against the Haqqani network.. Preferring a definite statement instead of a waffle,

This is easily concealed to the new or  hopeful statesman, because the elite of Pakistan are a cultured bunch,  more than able to hold their own in conversation, in beautifully spoken English. With impeccable social skills, they will fete you at dinners, all the while displaying table manners that are probably superior to our own.  And after you’ve burped your way back to comfort, you’ll discover that they have told you nothing. Former defense secretary Robert Gates remarked on this in (Reuters 1/21/2010), “Pakistan’s future military plans? U.S. doesn’t know”:

Even Gates was susceptible to the hospitality of his hosts. So he politely left them an out for their double game, which at the time included support of Haqqani:

Fragile or failed, the index is compiled from statistics. It can’t express the personal factor: A failed state offers no one to negotiate with. Talk to, yes. Negotiate with, no. The Pakistanis, with their white glove hospitality, conceal this well. You think you are talking to an authority. Perhaps, in a limited way, this is true. Pakistan is a place of fiefs. But unlike the traditional fief, which was a land domain, patent, or right granted by a sovereign, Pakistan’s fiefs are quasi-sovereign themselves.

For example, Pakistan’s military is not subordinate to the civil government. Open sources on this subject are highly charged, as if written by stakeholders.  Examples are provided by The Diplomat pages, and particularly, After Dawn: The Civil-Military Chasm Deepens in Pakistan. Lacking the literal reliability of Western reporting, there is information to be gleaned. The article begins with

China’s influence turns out to be crucial:

China is crucial because it has made Pakistan a major part of Silk Road, aiming to create a modern corridor of influence and prosperity all the way to Karachi.  The reporting of The Diplomat implicitly suggests China as a reason for (Reuters) Exclusive: Pakistan plans takeover of charities run by Islamist figure U.S. has targeted. But there is no evidence that U.S. pressure has anything to do with it. It precedes the aid cutoff.

There remain strong counter currents to the above.  Pakistan as it now exists is not going to quietly cede the future to something else.

Conclusion: If the aid cutoff is an intelligently informed attempt to strengthen the hand of the civil government, it might work.

Let’s not end the discussion like this, because it resembles a traditional chess game of geopolitics. It’s really a currents-of-history thing. Questions:

To be continued shortly. In the meantime, meet the new kid on the block.

August 30, 1981 began seven years of terror. The trigger was the assassination of Mohammad Javad Bahonar, prime minister of Iran, by the MEK. More hits followed. It has been asserted that the pace of hits was so quick, it threatened to eviscerate Ruhollah Khomeini’s government.

The MEK, a mind control cult, has isolated specks of appeal, such as equal rights for women. It is co-lead by a man and a woman. Nothing about those isolated specks justifies what the organization did in the 1981-1982 frame, or how it treats its members. Iran Protests notes that Iran is drowning in ideas. The creators of MEK made one more of the infinite varieties of folk stew philosophy out of these ideas, which include mayhem and murder. It also tastes of Marxism, Maoism, and Shi’ism. Scholars call it syncretistic,  an amalgam of mutually incompatible ideas.

There has always been extrajudicial killing in Iran, but the pace accelerated in 1982, and climaxed in 1988. Nine years after the 1979 revolution,  Ruhollah Khomeini was still, in word and reality, the supreme leader. In 1988, Khomeini had only one more year to live; perhaps he was anxious that the new forms of Iran would outlast him. So he suspended the rule of law.

What Khomeini’s followers did in the in the years climaxing in the 1988 executions of “political prisoners”, and doubtless at his direction, was absolutely horrible. The following year, echoing the reaction against the excesses of Iran’s reign of terror, Khomeini proclaimed a “year of law.”

As the Nuremberg Trials established, the will of the leader does not exempt his followers from guilt. The youngest victim of the French Reign of Terror was aged 14.  Iran’s Terror was similar. Memories of the stories, which so vivify Iran’s native practice of terror, have faded. All this happened before Internet archiving, which makes it impossible to offer you reliable, respectable links. Nevertheless, I have a little, approximate corroboration for  10 Of The Youngest Children Sentenced to Death. Quoting,

According to the Organization of Women Against Execution, Iran’s Islamic regime executed 187 juvenile females between 1981 and 1990, including nine girls between the ages of 10 and 13.

It is likely that a good proportion of the stories, which can be found in contemporary nonfiction literature, are true.

By 2009, Iran  had developed civil institutions useful to both religious and secular elements. Members of the Green Movement were punished in the civil framework. There was no need for terror, because the Greens had private lives of sufficient satisfaction that it was enough punishment to interrupt those lives.

But now Iran is faced with a bunch of rowdy, unemployed young men who have nothing to lose. They don’t feel prison, or house arrest, quite the same way. “Inside” is about the same as “outside.” If a young man has nothing to lose but his life, what effective punishment and deterrent can there be?

The complex of religion and military, the Qom religious establishment, the bonyads, and the IRIG, hold Khomeini’s charter, to create and perfect an Islamic state, and to expand it beyond Iran’s borders. Now there is civil conflict between the charter holders and the secular, civil needs of Iran. It’s really quite simple. Where  does the money go?

The charter holders are old men now. Many of them are senior clerics. Like Khomeini in his last years, they may, in futile search for stasis, push for what worked for them in 1988. Immersed and isolated in their own ideas of “jurisprudence”, which are to us medieval, they may not be concerned with history as written by Western historians. History may be the judge, but not for them.

This is why Western cheerleading  risks a new Terror.

We’re all voyagers on Spaceship Earth. 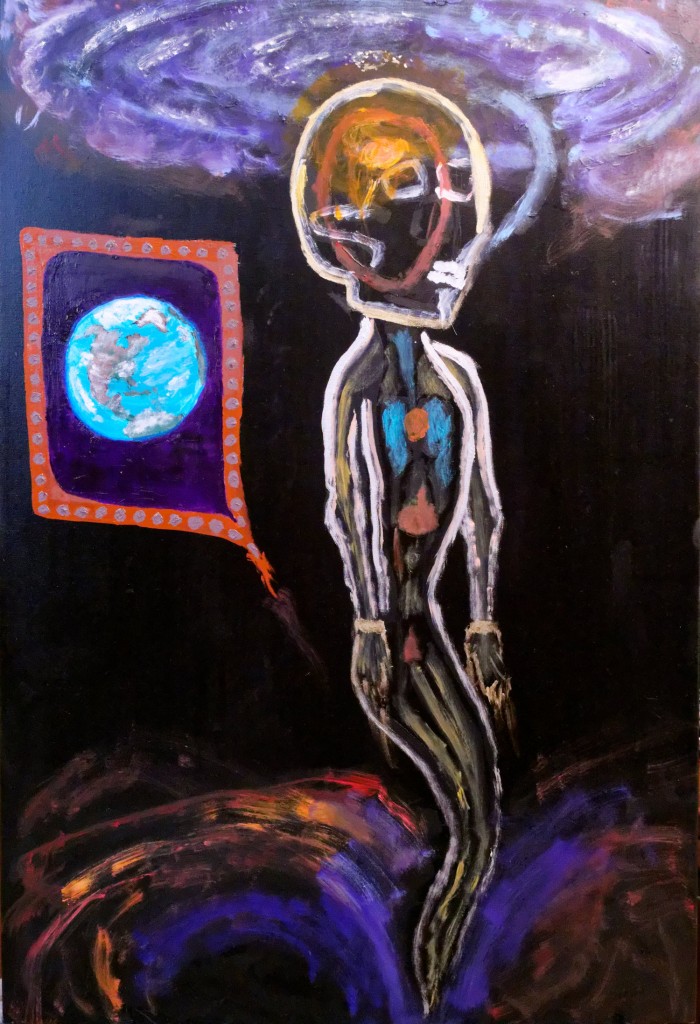 The spaceship is in trouble. The crew is squabbling. The biosphere is touch-and-go. Black holes threaten obliteration. Our final destination is unknown. Let’s try to hold it together for another spin around the Sun!