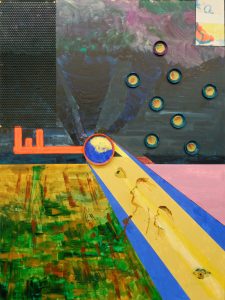 Our future is a keyhole.

(Click the thumbnail to enlarge.) Next to fields of waving grain, a family anxiously shelters from the approaching storm (triple tornadoes). Look closely; you’ll see someone making a mad dash for shelter. Their hopes focus on the keyhole, through which sunny skies beckon. 40″x30″; acrylic with objects on panel.

The keyhole symbolizes our wishes. Now it is time to make them. For the U.S., I hope that:

For Russia, I hope for

For China, I hope you do not replace soft power with hard power. They are not as compatible as you think.

For foreign policy in general, more consideration of human welfare in the scheme of the inevitable, amoral geopolitical games. Historically, “realpolitik” associates with pursuit of national interest. It could accommodate another meaning, a willingness to dissolve and reconstitute a failed state along completely new lines. There are hints of new thinking with Syria, but with agonizing slowness. It is such a painful struggle,over barren ground, almost worthless even as a pawn.

As Walter Cronkite said: And that’s the way it is. This blog will continue with the usual regular irregularity.